Ocean gliders are autonomous underwater vehicles used for ocean science. They travel in the seawater by changing their buoyancy and attitude in order to dive up and down successively, while they sample the seawater to collect oceanographic data. Gliders typically profile in a saw tooth pattern from the surface to 500 – 1000 m depth, travelling 3 – 6 km in the horizontal plane at a speed of about 1 km/h in every dive cycle. They are operating extensively for sustained observations both in coastal and open seas, collecting information of physical parameters like temperature, salinity, dissolved oxygen, chlorophyll, etc. along predefined transects.

Poseidon System has integrated two SeaExplorer gliders in its observing network for the Greek Seas (fig. 2).  One of them can reach 700 m while the other belongs to the next generation SeaExplorer X2 gliders designed to dive up to 1000 m depth. Both of them carry the payload of a CTD (conductivity, temperature, depth) and a dissolved oxygen sensor (GPCTD + DO sensor of the SEABIRD ELECTRONICS company).

Since 2017, HCMR conducts missions in the north Cretan Sea. An endurance line has been established in this area, in order to monitor the physical and biochemical parameters of the seawater (e.g. temperature, salinity, oxygen concentration), study the seasonal variability of the flow field, and collect evidence for the intermediate or deep water formation events that are known to occur in the area. During its mission the glider performs profile measurements following a trajectory parallel to the island of Crete, which has a length of approximately 220 km (fig. 2). The missions have a duration of 30 to 45 days, while the glider is able to repeat this trajectory 2 to 3 times during each mission. Its horizontal velocity (SOG - speed over ground) fluctuates between 0.15 and 0.4 m/s (depending on the direction and the magnitude of the sea currents) while its vertical velocity has values between 0.1 and 0.2 m/s. The deployment as well as the recovery of the gliders is always realized from a small boat (fig. 3) as the whole procedure is carried out by hand.

The control and the piloting of the gliders is performed wirelessly. The communication is realized in 2 ways: via radio frequency when the glider is located in a short distance from the pilot (~ 100 – 200 m) and via Iridium satellite connection for a distant manipulation during a mission. Through the wireless communication, the pilot has the ability to download data, check the functionality of the glider and its sensors, tune some of its operation settings and define its trajectory. 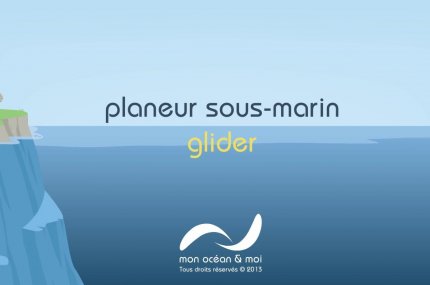