The main scientific objective of the European Strategy Forum on Research Infrastructures (ESFRI EMSO) is the long-term real-time observation of environmental processes and changes associated with the interaction between the geosphere, the biosphere and hydrosphere creating time series with super decadal data. Particular emphasis is placed on monitoring the benthic and pelagic ecosystems, biodiversity, dangerous geological and geophysical phenomena such as earthquakes, submarine landslides, tsunamis, turbidic-benthic "storms", storm surges, but also the effect of climate change on the deep hydrological environment and ecosystems. Bioacoustics with particular emphasis on the monitoring of pelagic fish populations and marine mammals. Such systems are also an essential part of the tsunami alert system. Achieving the objectives of the research infrastructure requires interdisciplinary synergy and the use of alternative and complementary techniques for measuring and analyzing data. Traditional technologies and metrics thus work with modern systems to collect as full a data set as possible, which then feeds analysis and forecasting models for a complete and reliable assessment of environmental change.

The integrated scientific cabled observatory at the "Hellenic" site (EMSO-Hellenic image 1) has been implemented at the site of Poseidon-Pylos approximately 12-13 km east of Methoni and at a depth of 1580m. The proposed site represents scientifically the wider area of ​​the western part of the Greek arc from Crete to the southwestern Peloponnese (wider scientific area "HELLENIC SITE" according to EMSO-PP preparatory phase) as well as the geodynamic, hydrological, climate and biology processes that govern the eastern Mediterranean. The Hellenic site in the Western part of the Hellenic arc is one of the proposed sites in the preparatory phase of the European ESFRI-EMSO infrastructure (http://www.emso-eu.org/management) and of the former European ESONET-NoE program of excellence and is part of the EMSO ERIC European network of measuring stations (http://emso.eu/). The new fixed seabed observatory is powered by an onshore fiber optic cable capable of transferring power and large amounts of data in real time. In this way it is possible to complement other parameters and processes observed throughout the water column from the surface of the sea to the seabed and its substrates. 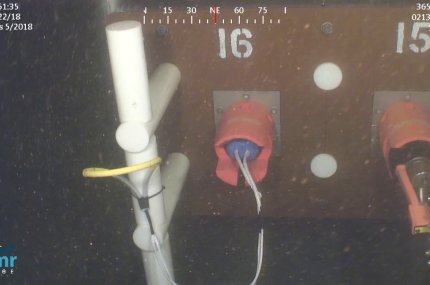