The Tonga volcano explosion in South Pacific was realized on Saturday 15th of January at 17:26 Local Time (08:26 Greek time, 06:26 UTC). As it is stated, “the Hunga Tonga volcano eruption is a one-in-a-century event with a plume of ash that went up to 30 kilometers (about 19 miles) into the stratosphere. Like the Pinatubo eruption in the Philippines in 1991, this eruption was not well anticipated and surprised the international volcano community. The explosion was heard and felt around the world and the air-pressure blast seemed to have revolved the globe at least twice” (https://news.umich.edu/tonga-eruption-and-tsunami-university-of-michigan-experts-available-to-discuss/). 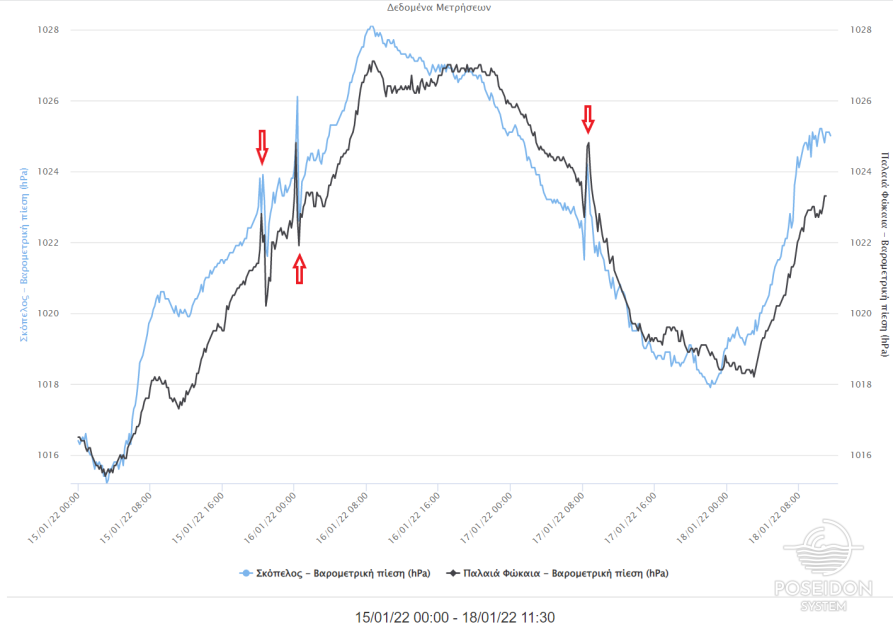 The signal from the Tonga explosion was recorded by the barometric sensors (10 minutes recording interval) of the two POSEIDON tide gauges which are located in Palaia Fokea and Skopelos island. As it can be seen in the atmospheric pressure graphs of the stations (blue for Skopelos, black for the Palaia Fokea), there are two events recorded on the night between 15th and 16th of January: The first event occurred at 20:00 UTC (13.5 hours after the event) on Saturday, January 15th and represents the atmospheric blast directed eastwards from the Tonga explosion area, while the second one which recorded 4.5 hours later on Sunday 00:30 UTC (18h after the event) was due to the westward path of the blast. Moreover, one more event was recorded 32 hours later, on Monday morning at 08:30 UTC, as the blast circulated the globe for the second time.