THE WAVES OF MEDICANE “IANOS”

THE WAVES OF MEDICANE “IANOS”

From 17-20 September 2020, the Mediterranean cyclone IANOS hit Greece with heavy rainfall and strong winds, causing the death of four people as well as extensive damages. The areas most affected by IANOS were the Ionian Islands (Zakynthos, Kefalonia and Ithaca) and the coastal areas of Achaia and Ilia where several buildings were destroyed, trees uprooted, landslides were caused, boats sunk and many villages were left without electricity. Due to heavy rainfalls in Central Greece (Karditsa and Farsala) rivers overflowed resulting in flooding affecting many houses, roads and large agricultural areas. IANOS brought high winds and heavy rains to parts of Sicily and Calabria regions on Thursday, September 17, as it moved across the Ionian Sea while severe flooding was also reported in Crete shortly before the phenomenon weakened.

Mediterranean cyclones – known also as medicanes (by combining the words Mediterranean and Hurricane) - occur once or twice a year on average - mainly between September and January - with the vast majority of them occurring in the southwest Mediterranean and south Ionian. These intense cyclones are the result of the synergy of synoptic scale atmospheric phenomena (e.g. an upper level isolated pressure low), which provide the necessary conditions for their formation, with medium-scale processes such as strong atmospheric disturbances (deep convection) and latent heat fluxes which contribute to the medicane further development and maintenance. Although the Mediterranean cyclones have been studied by many researchers in the recent decades, their predictability remains still low due to the interaction of multiple factors that affect their life cycle, the Mediterranean orography, their rare occurrence and the fact that they mainly take place over the sea where insitu observations are limited.

The Mediterranean cyclone IANOS began to grow on 14/9 from a barometric low which moving slowly in the Gulf of Sidra (where the sea surface temperature was higher than 27οC) and in combination with the structure of the upper atmosphere, quickly began to acquire the characteristics of a tropical cyclone. On 16/9 the cyclone intensified and started moving north-northeast to Italy with the intensity of the winds - according to satellite data (from scatterometers and altimeters observations provided by the Copernicus Marine Service Copernicus CMEMS - cmems.eu) - exceeding 68 km/h in the central Ionian and reaching 76 km/h when passing near the southern coast of Italy. On 17/9 the cyclone following the circulation of the upper atmosphere began to move east, with the maximum intensity of the winds above the sea reaching 88 km/h as its warm centre (at 995mbar) was approaching the Ionian Islands. On 18/9 IANOS centre entered the mainland of western Greece with wind speeds - as recorded by satellite - reaching (during morning hours) 71 km/h near the coast of Kefalonia. On 19/9 and 20/9 IANOS moved southwards, along the coasts of the western Peloponnese, and dissolved between Crete and North Africa. 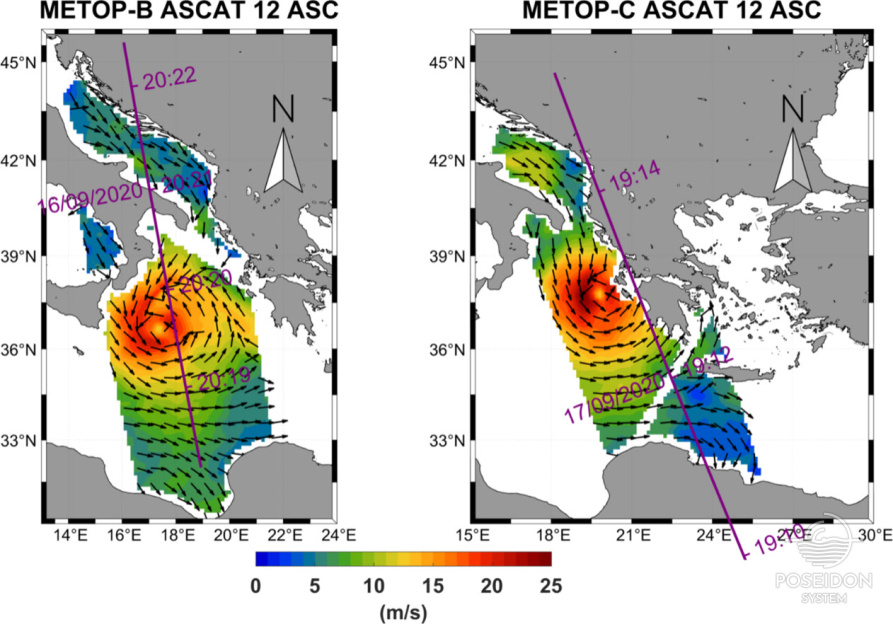 The following video shows the evolution of the wave field (significant wave height – SWH) during the passage of IANOS medicane over the Ionian Sea. It is based on wave analyses fields of the Copernicus Marine Service (MED MFC – Med waves component) (https://resources.marine.copernicus.eu/..MEDSEA_ANALYSIS_FORECAST_WAV_006_017). Wave analyses and 10-days forecasts over the Mediterranean Sea are produced and delivered on a daily basis by the MED-MFC/Med-waves component of the Copernicus CMEMS (Med-waves service is operated by the POSEIDON team of HCMR). 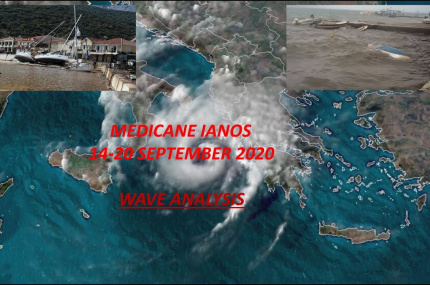 Significant wave height measurements from the altimeters of Sentinel-3b/3a, Jason-3, CFOSAT, Saral and H2B satellites between 16/09 - 18/09 are shown in figure 2. Due to the satellite tracks topology the evolution of the phenomenon cannot be fully captured. We see that at 20:10 on September 17 the significant wave height south of Zakynthos was measured at 5.1 meters from the altimeter of the Sentinel-3b while about 8 hours earlier Jason- 3 had measured waves of 5.2 meters further southwest of Zakynthos.

It should also be noted that on the west coast of the Peloponnese, waves reached maximum values of 4-4.5 meters (SWH), which is also confirmed by the measurements of the buoy station of the POSEIDON system, west of Pylos (Figure 3).