The European Multidisciplinary Seafloor and water column Observatory (EMSO) is a distributed research infrastructure consisting of fixed seafloor and water column observatory nodes for deep ocean observations. EMSO observatories are deployed at key sites around Europe and have long-term, high-resolution, (near)-real-time capabilities to address environmental processes such as climate change, natural hazards and marine ecosystem changes. EMSO aims to harmonize and integrate the different research interests of several European nations and covers a wide range of interdisciplinary areas including biology, geology, chemistry, physics, engineering and computer science, from polar to tropical environments, down to the abyss. The data generated in EMSO, enables analysis over different space and time scales, overcoming the traditional approach of focusing on limited single data streams.

EMSO activities are coordinated by the EMSO European Research Infrastructure Consortium (EMSO ERIC), which is an intergovernmental organisation that was set up by the Commission Implementing Decision (2016/1757/EU) of September 29, 2016 and it is hosted by Italy. The participating countries in the consortium include France, Greece, Ireland, Italy, Portugal, Romania, Spain and the United Kingdom.

HCMR operates the Hellenic Arc node of the EMSO ERIC in the SE Ionian Sea which is located on the steep marginal slopes and basins of the western segment of the Hellenic Arc and Trench System. The node’s observatory consists by: (a) The Pylos multi-parametric buoy, which monitors regularly the physical characteristics of the water column down to 1000m with additional biochemical information for the first 100 meters and it is being part of the POSEIDON observatory since 2007 and (b) The ocean cabled observatory that was deployed at the bottom of SE Ionian Sea (1560 m depth) off the Pylos coast in 2018. The seabed platform is connected to the Methoni land station with a 13Km length fiber-optic cable and carries sensors that can provide data for conductivity (salinity), sea temperature, sea level with tsunami detection capabilities, chlorophyll-a, dissolved oxygen, dissolved CO2, turbidity, pH, currents of the water column in a distance 300 m from the bottom, ambient noise recording with emphasis on the marine mammals acoustic/bioacoustics, seismic activity, magnetic and gravitational field. 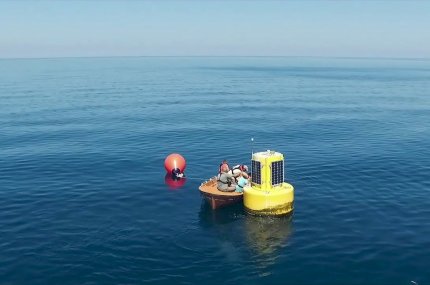